Thailand-Faiyen’s Music Was Their Crime 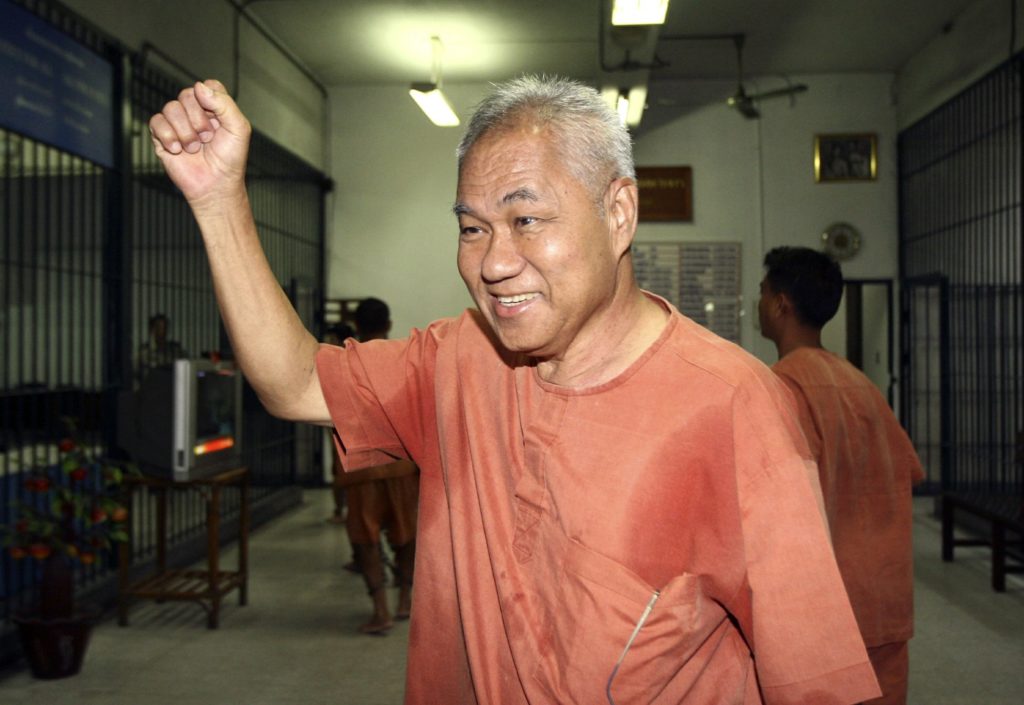 FILE - In this Feb. 28, 2012, file photo, Surachai Danwattananusorn, 70, arrives at a criminal court in Bangkok, Thailand. Surachai, a prominent critic of the Thai monarchy and establishment, went missing, along with two aides, in Laos in December 2018. The mutilated bodies of the aides were later found, dumped in a river. Surachai remains missing. (AP Photo, File)

BANGKOK (AP) — They are members of a folk music group living communally in the Southeast Asian nation of Laos, but they are in fear for their lives.

The musicians from the band Faiyen fled their homes in neighboring Thailand in 2014, afraid of arrest after a military coup overthrew their nation’s elected government.

Their music was their crime.

Drawn into the polarized politics of Thailand’s last decade, some of their songs mocked the monarchy, a sacred institution as far as many Thais — and the law — are concerned.

For their heresies, they now believe they may be kidnapped or killed. Their fears are not without justification.

Since last December, six fellow Thai exiles in Laos associated with anti-monarchist views have disappeared in suspicious circumstances and their families presume they are dead. The mutilated bodies of two washed up on the Thai side of the Mekong River. A veteran far-left activist who in the 1970s was in the jungle with the Communist Party of Thailand disappeared along with them.

Two other activists in Laos, rights groups say, disappeared in 2016 and 2017.

All of the exiles were associated with Thailand’s Red Shirt movement of democracy activists, many of whom are also supporters of former Prime Minister Thaksin Shinawatra. Thaksin was ousted by in a 2006 military coup that triggered a long and sometimes violent struggle for power between supporters of the populist billionaire and the army-backed royalist establishment.

That charged political atmosphere led some Red Shirt supporters to begin openly questioning the monarchy’s role in Thai society and politics, a grave taboo. Thai law mandates prison terms of three to 15 years for insulting the monarchy, and courts have proven to have broad interpretations of what constitutes an insult.

The junta that took power in the 2014 coup — and remains in place today — did so with a vow to crack down on anti-monarchists, even for a time moving all so-called lese majeste cases from civilian court to military courts.

While no evidence has been presented that the junta is involved in the disappearances in Laos — and even those in exile stop short of directly accusing the government — activists and rights groups say someone is seeking extrajudicial retribution.

The latest exiles to vanish were three activists who tried to flee Laos by crossing into Vietnam in January, but according to rights groups were arrested and secretly extradited to Thailand. The authorities in Vietnam and Thailand have denied any knowledge of the affair.

“When we heard the news, I realized, ‘OK, we are really in danger with all the people disappearing in previous years, and more this year,’” Faiyen member Romchalee Sombulrattanakul told The Associated Press by phone from Laos. “It seems they want to get us now. And, we are the only group left in this country.”

Romchalee is a 33-year-old former cellphone saleswoman who considered herself apolitical until she saw what she calls the unfair suppression of the Red Shirt movement, which she believed represented the interests of Thai workers and farmers.

When the bodies that washed up on the shore of the Mekong in December were identified as fellow activists, she said it became “clear that those who disappeared were turning up dead. No one was arrested or sent to be tried in Thailand.”

She’s not being paranoid, according to Human Rights Watch, whose senior researcher in Thailand, Sunai Phasuk, said that the New York-based group received credible warnings about the dangers facing Faiyen. All of those who disappeared were wanted by Thai authorities for alleged anti-monarchy activity, he said.

“Faiyen is the last remaining on the list that Thailand wants,” Sunai said. “Other names have been removed from the list for the fact that they have been disappeared.”

Thai Defense Ministry spokesman Kongcheep Tantravich said it would be “impossible” for the government to make activists like those in the Vietnam case disappear. He added that he wasn’t sure why the activists in Laos were so scared.

“If they are so afraid, they could return and enter the legal process,” he said. “Whether or not they will decide to come back is up to them.”

The fear in which Faiyen lives is beyond description, said Romchalee. The slightest sound in the night sends her frantically peering out through windows into the dark, praying that it isn’t someone trying to attack them. She is shaken by a mysterious man who keeps contacting her through social media and seems to know her every move — which restaurant she has eaten in and to where they have changed living quarters in search of safety.

“Each day you wonder whether or not you can go shop, or meet your friends, because you have no idea when you will be taken away,” said Worawut Theunkchaiphum, another band member, noting that those who previously went missing were taken from their homes or while traveling.

“We exist with no protection whatsoever. We are invisible. We are in a country where the Thai government could easily send in teams to take care of us,” he said.

Faiyen’s members were among scores of Thai activists who fled after the latest coup. Many had no travel documents and little money when they escaped to neighboring Laos and Cambodia.

Those who were well-connected or prepared with money and papers were able to move on to safer havens such as Japan and France.

Hardcore activist leaders received funds from sympathizers to keep them afloat, doling out portions to their loyalists in the exile community. Low-profile members, including farmers, workers and office employees, were often able to fade into the woodwork, giving up their activism for what local jobs they could find.

The scrappy members of Faiyen, poorly connected but politically engaged, decided to carry on with their activism. Along with several others in the small and cliquish exile community, they produced programs and songs in Thailand’s “luk thung” country music style that they posted online.

The activists who disappeared had also continued to put provocative programming online.

By refusing to change their approach, they had made themselves targets, said Benjamin Tausig, an assistant professor of music at New York’s Stony Brook University who has closely studied Thailand’s recent protest movements.

“We live in a moment of extraordinary visibility, which is simultaneously a platform for speech and a mode of surveillance,” he said. “Their songs move in an ecosystem that can spread the word fast, but that can also get you in trouble fast.”