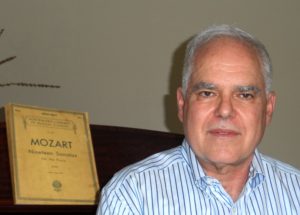 Ken Hoffman is the grandson of Halina Neuman, who survived the holocaust with his mother, Jola, because of music.

After the war, Jola and Halina emigrated to England and then to the United States. Jola married Eli Hoffman. Over their lifetimes, both were socially very active in the civil rights movement, marched for peace; working for desegregation and equal rights. Ken and his three brothers, Marc, David, and Edward, inherited their values and mission to achieve social justice.

Ken has a BA from Cornell University, MD from Eastern Virginia Medical School, and an MPH from Harvard University. He surprised everyone by choosing to practice medicine in the US army where he served for 23 years on active duty. He completed both a psychiatric and preventive medicine residency and was involved in the first mental health evaluations of soldiers who had been identified as infected with HIV. He also developed high interest and skill in addiction medicine, establishing a Center in Addiction Medicine at the Uniformed Services University, and serving as the Army’s alcohol and drug consultant. Ken continued working in the federal government as a senior medical officer involved in developing guidelines for the identification and treatment of opioid addiction and other substance use disorders.

Married to Ann since 1983, they have one son, Jay, and two daughters, Leah, and Phoebe. A diversified family appreciating the impact music has in the fight for equality and social justice.