‘South Sudan is one long poem’: the music that shaped a nation – photo essay

As the country marks a decade since independence, musicians talk of the songs and rhythms that help create a shared culture and community for people displaced by civil war

Future Star theatre and music group during a concert at Hope Village, a new venue in Juba. The group wants to bring South Sudanese of all backgrounds together to fight tribalism. Photograph: Adrienne Surprenant/Collectif Item

Global development is supported by

What comes first is a culture and then a nation,” says David Otim, a musician from Bahr el Ghazal, who performs and teaches South Sudanese songs. “Our [civil] war, which was caused by a foreigner, led us to not understand ourselves, made us go and destroy our culture out there [in refugee camps].”

The South Sudanese endured almost 40 years of fighting against the north, before the comprehensive peace agreement in 2005, and independence on 9 July 2011 when South Sudan’s flag was raised at John Garang’s mausoleum in Juba. The national anthem was ready at that event: it had been chosen through a contest. The winning piece was composed by students and teachers from the University of Juba’s music department. “It was a very emotional day,” says Gabriel Nasir, a music teacher who participated. “It has all our dreams, our feelings and our hopes in it.”

Two years later, in December 2013, President Salva Kiir, a Dinka, accused the former vice-president, Riek Machar, a Nuer, of plotting a coup. Fighting between the two main tribal groups broke out in the capital and the countryside. Thousands fled, again.

“I left everything there, everything got lost,” says Deng Nyalchyewk, a Nuer anthropologist who worked for the Ministry of Culture to preserve the heritage of the country’s tribal groups. “But that is not the issue now, because the most important thing you have is being alive.”

In the three-roomed shelter he shares with his family at a camp for internally displaced people, musical instruments and books cover the table. Fabrics have been hung to hide the mud walls and the memories of his arrival, when “everything was a mess” and all you could hear were “people crying”.

New sounds can now be heard between the UN tarpaulins, barbed wire, and slimy collective toilets of the camp. The Maale music group led by Nyalchyewk warms up to perform Nuer songs and dances, a crowd gathered in an almost0 perfect rectangle. The rhythmic play fight starts. The troop’s youngest boy holds a shield made with tin cans.

In South Sudan “everyone is a musician”, says Nyalchyewk. Songs are used to stop young people reaching the “empty places where you become a person with no historical background”. 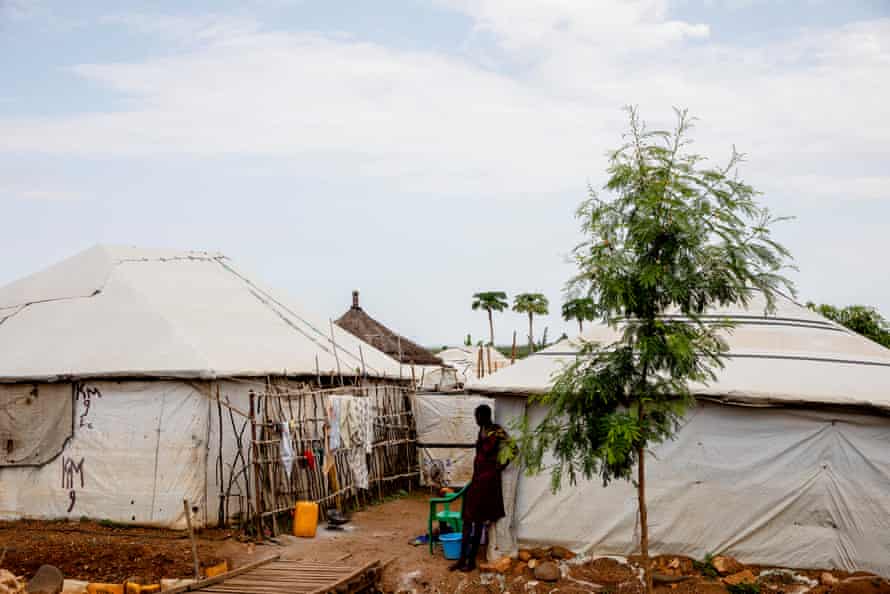 Nyalchyewk believes preserving the culture of South Sudan’s 60 or so tribes is key to creating a sense “of commonness” in a country where a third of the population is either displaced or living as a refugee.

“Being a refugee is like the world is somewhere and you are out of that place,” says Emmanuel Kembe, one of South Sudan’s most famous artists, who was persecuted by the country’s government for his protest music.

“Peace is not something we just talk about, but something we work for,” he says. “This is not just another peace where we come to celebrate and then go. We still see people in the street begging, and this is not peace.”

Kembe’s concerts bring solace to the South Sudanese. He has performed at Kakuma, Kenya, one of the world’s largest refugee camps. Rapper Johnson Mike spent his childhood in the camp and co-founded the Hip Hop Clinic, a crew reacting to “everything around us [that] is wrong”. Mike grew up without his father who, like many men of his generation, fought during the civil war alongside John Garang, the Sudan People’s Liberation Army’s leader. Garang died in a helicopter crash shortly after he brokered the 2005 comprehensive peace agreement.

“It’s quite something to accept a collective trauma,” says Ade, 27, born Mandela Matur, as he takes a break from recording his new song in a tiny studio, where the conversation slides from Pan-Africanism, to cancel culture, then to identity.

“At some point in my life, I did not want to accept the identity of Sudanese because of what I saw. They used to drop Antonovs on us: planes would come up and they dropped bombs on us,” says Ade. “To me, I feel like that is not my country, they don’t really care about me.”

Ade, who lived abroad from the age of eight, returned to Juba in 2015. He learned to love his country as if it was “one long poem”. The artist hopes to provoke change.

“It was my evolution, but then also the revolution of my country,” Ade says. “This independence is for a couple of leaders that have done their fight. These are the people who earned the liberation. So they feel like independence is for them … But what does that mean for us as citizens?"