The Heroic Efforts of Venezuelan Musicians 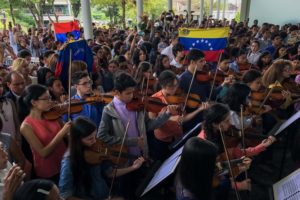 "Armando Cañizales left his viola at home that day. Eighteen and talented, he was a success story of Venezuela’s state-run music program for the poor. But he decided it was time to join the street protests against the government that had supported his career. As teenagers throwing rocks retreated from a line of soldiers, Mr. Cañizales moved forward alone. He said nothing as he advanced, arms outstretched, palms facing up. Then the fatal shots rang out."

Standing up to Venezuelan's repression cost one violist his life. Musicians' call to action is as a unified force, standing up against the dictator and his repressive government.  The New York Time's Ana Venssa Herrero and Nicholas Casey report on this story, published on June 10, 2017.

"Hundreds turned out for Mr. Cañizales’s funeral in May. Members of his orchestra set up their music stands in the cemetery to play. Someone held a Venezuelan flag.  Mr. Cañizales’s mother, Mónica Carrillo, went up to the teacher, Mr. Pérez, and handed him her son’s viola. 'I can’t describe what I felt when I opened the case and took Armando’s viola into my hands,' he said. 'There was a pressure on my chest so strong, I just wanted to cry, it was so terrible. He added: “His mother said, ‘I want that Armando’s viola gets played today.'"