An Chorn Pond is a musician and founder of Cambodian Living Arts.

Arn was born in the early 1960s into a family of performing artists and musicians. His parents raised Arn and his 12 brothers and sisters in Battambang, Cambodia where they owned The National Charity Company, an opera company that performed in temples, opera houses, and mayors’ compounds. He and his siblings performed along with his father, grandfather, uncle, and cousins. Life in Battambang was enriching, as it was a time when the arts flourished for music, dance, live theatre, and film. 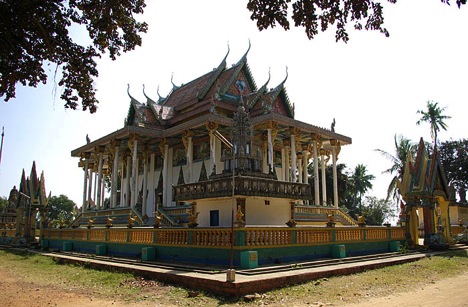 In 1975 the music and arts stopped and the temple ceased to exist as a place of refuge and spiritual life. Pol Pot and the Khmer Rouge took over Cambodia and devastated its people for four years. They systematically tortured, starved, and killed more than two million people–those who were connected to the former government, artists, intellectuals, and professionals.  They persecuted ethnic Chinese, Thai, and Cambodian Christians and Buddhists. It is reported that 90% of Cambodia’s artists were killed, which nearly wiped out the memory of their traditional culture. After the fall of the Khmer Rouge, Cambodia’s economy suffered and for the few surviving master artists, continuing in the performing arts or teaching was a struggle.

When the Khmer Rouge took power, the 11th-century Wat Ek Buddhist temple, where Arn spent so much time as a child, was converted to a prison camp. In 1975, separated from his family at aged 11, Arn was among hundreds of children taken to Wat Ek. In the camp, Arn witnessed the terrors of torture and murder of those captured by the Khmer Rouge.

Singing music was prohibited in the camp. If one was caught, they were immediately executed. Arn heard many artists chanting before they were killed, before he was forced to push them into the graves. They gave up their life for music and art.

During the first week in the camp, Arn was one of five children trained by a master musician to learn the flute and khim, a Cambodian hammered dulcimer. During the training the master and three of the children were executed. Arn and the other boy were spared, instructed to perform revolutionary music for the prison guards. Soon after, another master was brought to the camp to continue training Arn and the other boy.  Music saved their lives. Arn says that the music also allowed him to escape the pain of existence he felt every day.

A year later, when Arn was 12 or nearly 13, the Vietnamese invaded Cambodia. He and other boys from the prison camp were sent with guns, untrained, to fight the Khmer Rouge’s enemy. The boys fought in the rice fields without cover. Used as decoys by the Khmer Rouge, they were frightened and vulnerable. After about a year, they were pushed deeper into the jungle near the Thai border. Arn’s fear vanished, at which time he decided to escape the fighting.  For a few months, Arn lived in the jungle. Starving and sick from exposure and malaria, he was rescued by several girls. One day he woke up in a Thai refugee camp.  The girls who rescued him were not with him when he awakened and he did not know how he arrived there. Then, an American Lutheran minister and aid worker Peter Pond who was visiting the camp befriended him. 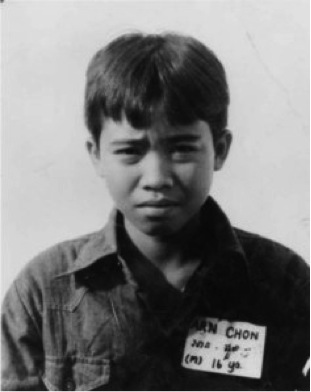 In 1980 Peter brought Arn back to New Hampshire, USA and adopted him. Arn’s transition in America was not easy. He was different from the other children where he attended high school. His classmates were not kind to him. He felt so much pain after surviving the Khmer Rouge and Vietnamese, he could not cope with the reactions of these American kids who did not understand him.  He felt like he wanted to die. His American father reassured Arn, suggesting he tell them about his life and what he survived. When Arn started telling his classmates about his life, they listened. They became his friends. And this experience changed the course of his life. He decided he would tell the world about his experience, what happened to his people, and re-ignite the performing arts of Cambodia.

Arn was educated at Brown University and graduated from Providence College. Later he founded several organizations including Children of War, Cambodian Volunteers for Community Development, and Peace Makers, which is a U.S.-based gang-intervention project for Southeast Asian youth. In the mid-1990s, Arn returned to his country to learn about his family and their opera company, his music teacher from the prison camp with whom he reconnected, and the performing artists he knew when he was a child.

In 1999, Arn created the Cambodian Masters Performers Program, which was renamed to Cambodian Living Arts in 2009. The mission of the organization is to connect elder Cambodian musicians and performing artists with younger students. By doing so Arn is reviving the traditional music of Cambodia that the Khmer Rouge nearly extinguished.

After 30 years living in the United States, Arn lives full time outside of Phnom Penh.  He is an accomplished musician, recording artist, and performing, playing soothing traditional love songs. He continues his work with children traveling around Cambodia on his Khmer Magic Music Bus, "restoring Cambodia's rich musical heritage, one village at a time".

Arn is the recipient of many awards including the Reebok Human Rights Award, the Anne Frank Memorial Award, the Kohl Foundation International Peace Prize, and two honorary doctorates for peace and humanitarian service. Patricia McCormick’s Never Fall Down tells the story of the Cambodian genocide based on Arn’s recollections surviving the atrocities of the Khmer Rouge. Arn was also featured in the Emmy-nominated documentary The Flute Player. 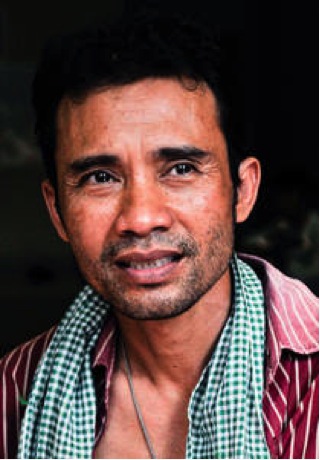 Arn never saw his parents again. He learned that his father died young around age 30 or 31 in the Killing Fields. He does not know what happened to his mother or 10 other siblings. Two sisters survived, one living in Cambodia, the other in the United States.

Everyday Arn lives with survivor's guilt, his past traumas, and the choice he had to make—being killed or killing. He does not understand why he survived the Killing Fields when so many were murdered during the Khmer Rouge genocide. He has learned how to cry, to soften his heart, to heal.   He believes in the power of music.  Having been a child forced to carry a gun and kill, Arn wants every child to learn music as it is the instrument of peace.