Tereka lives in Kampala Uganda where he a professional dancer and choreographer, as well as the founder and artistic director of the Yutta Konvictz dance company.  "Stretching out minds and encouraging one to speak out with determination, this combination allows artists to produce something that is extraordinary" is how Tereka defines Yutta Konvictz. The company's core consists of seven members and up to 30 people as needed.  Started in 2006, Yutta Konvictz's mission is to transform society through dance.  Through dance, performances communicate and educate the audiences about the things that affect society. In Uganda there is much to say.  They perform mostly in Uganda and have traveled to Kenya and Rwanda.  They wish someday to reach beyond their locale so others will know about their work and country. 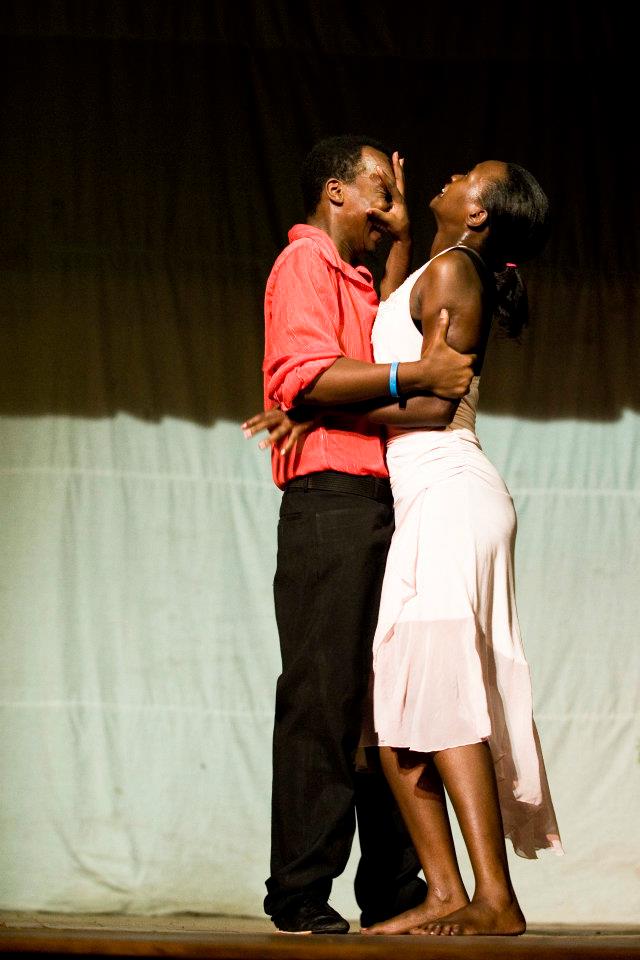 Located in East Africa and surrounded by Sudan in the north, Kenya in the east, Tanzania in the south, Rwanda and Burundi in the southwest, and Congo in the west, Uganda has a tortured 20th-century history of ruthless, corrupt dictators.  Idi Amin in the 1970s was known to exercise ethnic persecution, extrajudicial killings, political repression, human rights abuses, and economic ruin.  Milton Obote continued Amin’s wrath in the 1980s.  An unknown number of people were abducted, interrogated, and “disappeared” for suspicion of supporting the guerrilla rebels who opposed Obote.  One of Uganda’s most notorious torture chambers existed in the Nile Mansion a slaughterhouse where many were taken and few, if any, ever came out alive.  Today the Nile is a hotel, government building, and an office “to blot out the red mist,” Tereka says.

It is estimated that one third of Uganda’s population was exterminated under the reign of Obote.  The terror stopped in 1985, when the National Resistance Movement (NRM) and its military arm the National Resistance Army (NRA), led by Yoweri Museveni, successfully overthrew Obote.  A year later, Museveni was elected president.  With Museveni in power, the NRM emerged as the strong Marxist political party.  Yet tensions are mounting in Uganda today with the Lord’s Resistance Army’s atrocities in the north and tribal-based politics in the south.  Though Museveni remains strong, reports of corruption and human rights abuses are increasing and destabilizing the country.

Following the years since Museveni was first elected, Ugandans are experiencing increased oppression with the parliament passing a law allowing police more power while restricting people’s rights.  People are not allowed to gather in public places or express dissent and criticism of government policies.  Police may use firearms to shoot and kill protesters and bystanders in demonstrations.  Media outlets are targeted and closed down and threats are made against civil society groups and journalists whose work involve government policy and human rights—particularly the rights of lesbian, gay, bisexual, and transgender people.

Tereka explained that it’s on account of this mandate that in May 2013, ‘The Monitor’—a local daily—was literally put under siege by the police and shut down for 10 days after publishing a letter, leaked to it by David Sejusa, currently in exile in the UK detailing a plan for the current Head of State to hand over power to his son, known here as the ‘First Son’. It is also how, in October 2012 the ‘State of the Nation’, a local production by a local playwright, John Segawa was deemed ‘incisive and a threat to patriotism’ since it highlighted critical issues like corruption and bad governance in Uganda. The play was banned immediately after its premier. Tereka was part of an audience that was watching some documentary films in Watoto Church about human rights in June 2010 when police raided the church and blocked the screening of a film on the trial of prominent members of the leadership of the defeated Nazi Germany after the World War II.

Tereka feels that as a young artist, it is very easy to dismiss and blot out of your mind incidents that occurred before he was even born. He can’t blot out Byron Kawaddwa’s story in the early 1970s or indeed the silent but ever-present, all-seeing shadow of government hovering over every production that hits Uganda’s theatres. Because it is not pre-emptive, it means that an artist will not know that their production is doomed until it hits the stage—after investing often scarce resources and much-needed time only to see the production banned after the maiden show—if one is lucky—or worse, stopped mid-performance. As an artist, one's creative ability is severely stifled but fortunately, not impaired.

To avoid retribution, the artists try to steer clear of most of the issues that put government on the spot—human rights, corruption and embezzlement, press freedom, service delivery—or more accurately the lack of it; and focus on those that are more endemic to our society and communities e.g. domestic violence — especially against women, child labor, abortion, HIV etc.—so they are still able to make a difference.

Uganda’s Anti-Homosexuality Act, 2014, also called “Kill the Gays bill”, criminalizes homosexuality.  The day after the law was passed a newspaper exposed the names and photos of 200 “top homosexuals”.  The Associated Press reports that on August 2, 2014, a Ugandan court invalidated the anti-war law because it was passed during a parliamentary session without a quorum. The government may appeal the ruling in the Supreme Court.  Still in effect is a colonial era law that makes sex acts "against the order of nature" illegal. 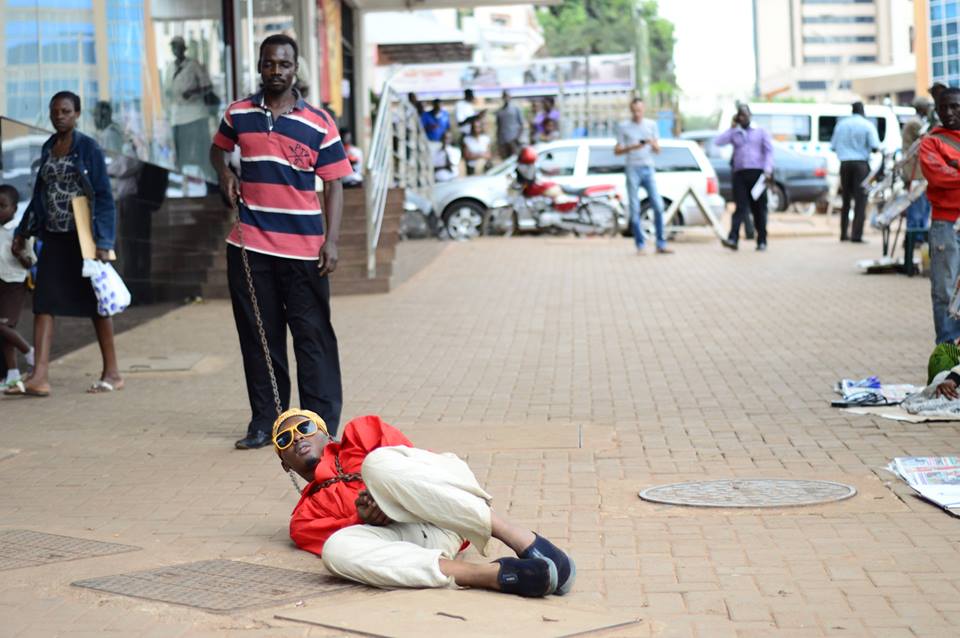 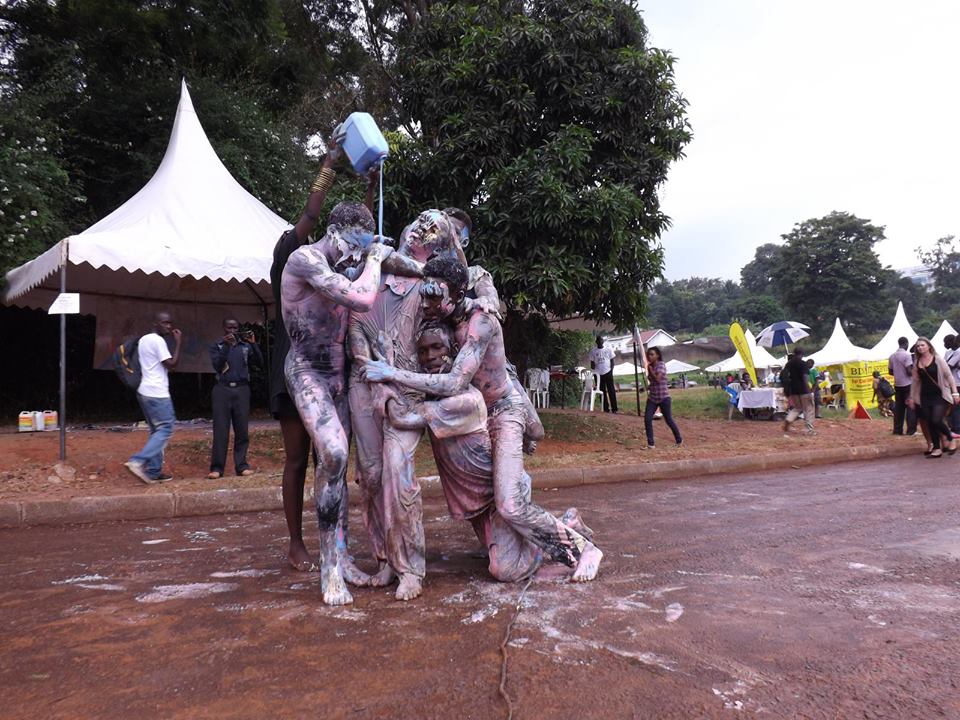 While public gatherings are risky, Tereka and his group are street performers.  Tereka is careful, keeping publicity light and targeting busy places with moving pieces to perform.  He does not give the authorities a chance to scrutinize the issues expressed in the performances.  Tereka’s performances communicate highly sensitive topics are only performed in the safety of festivals where diverging issues are accepted.

Byron Kawaddwa one of the known artists here was actually the director of the National [theatre] at the time, he did a musical was called “Oluyimba lwa Wankoko” in English, which is translated as “Song of the Cock” . . .  Oluyimba Iwa Wankoko, we call the silence description of what was going on with gross abuses in human rights by then, by then the president was Idi Amin . . . the play actually depicted the things that were happening within the country by then gross abuses of the human rights that were happening at the time, so because by then the people who were crying out for help, well not actually help but whenever they ordered out what they wanted, so I think this man strongly came up with a play and he put everything into a production, and that production later got him killed.

I believe that I can also inspire change as an artist because I have a very, very loud voice.  So sometimes when I do these works I believe that when someone sees them or when we do them there is a hope that is reinstated within the people . . . that when they see these kinds of works, their hopes will be push far more ahead and I believe as a person and as a nation, as a person and as an artist and my other artists, we’re the people that push this, stir this country ahead with our arts that we do.

There are so many artists out there who would like to express, who would like to share their news, but I think they are really scared about their lives or they are sitting in their own comfort zones and they don’t want to use their art like they have to express or even to reach out to other communities to change the nation. I believe that we as artists can come together, as artists if we can come together and use this opportunity to speak out our voices then these nations will be shaken up, whichever nation is suffering human rights, we the artists have the power to change  the will of the people.  I believe this project is going to be an eye opener by all the other artists who are taken by it.