Godwin Mindrea Buwa was born in Uganda where he lives today as a civil rights lawyer.  He developed an interest in music while working at the Refugee Law Project, Center for Justice and Forced Migrants in 2003 when he interviewed a new client, Mulombamungu Aloys II.

Mulombamungu Aloys II (familiarly called Aloys) is a musician from the Congo who fled his country after suffering abuses related to ethnicity and music.  As Godwin and he worked on his legal case, they explored their mutual interest in music and the idea of sharing concerns about human rights and feelings about human suffering.  They came to realize that through music they could disseminate their personal accounts and feelings to the world.  As Aloys described recently in an email, “We hope to rock, touch the souls and educate the nations.”  Aloys participated as an actor in the Ugandan film "Your Peace is My Peace," a story by Managing Director of Peace Solutions International (PSI) Laira L.T. Bertin, that promotes peace and development in Africa (April 2014).

While Godwin had no formal music training, he took to writing lyrics. Turning to Aloys for ideas, Godwin wrote about Aloys and his family’s experiences surviving conflicts in the Congo and their concern for the people in Uganda.  Aloys, experienced in creating melodies for church music and reggae in the Congo, composed melodies for Godwin's lyrics.  It was a natural partnership.  Aloys said these songs were about “innocent blood”.

The initial collection of songs they produced include Innocent Bloodshed, Wake up Jerusalem, The Pain of Bad Friends, and Ghetto in the City.  Energized by this collection, in 2007 Godwin and Aloys formalized their partnership, calling themselves “Fathers and Crusaders”.  They pooled together money that allowed them to perform live with instrumentalists and record music in a studio. 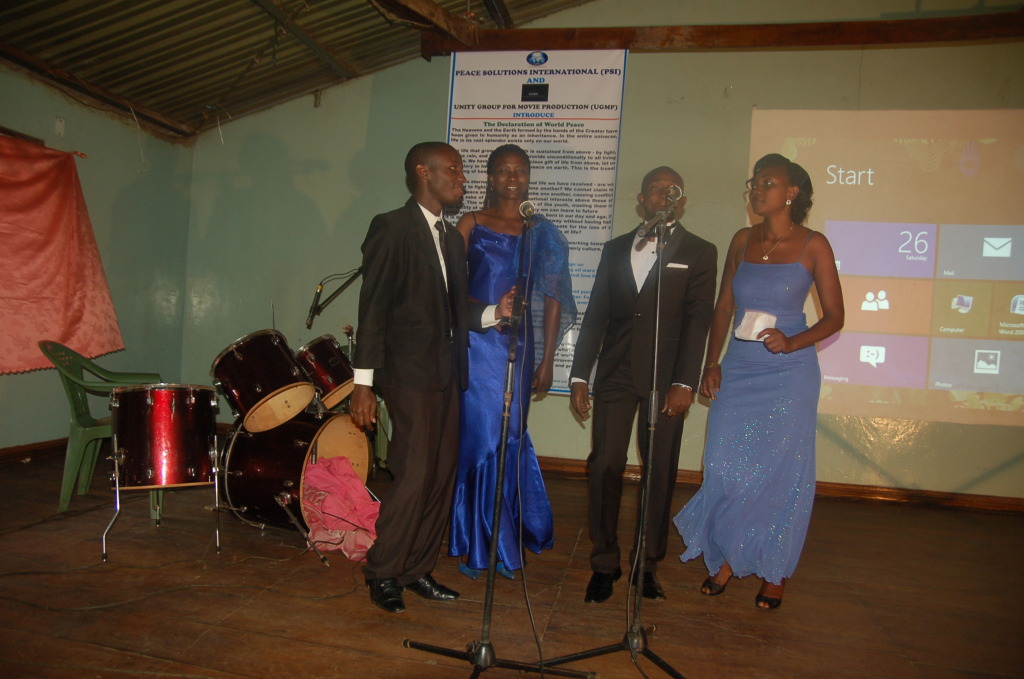 Fathers and Crusaders sing about issues that affect Ugandan people, including the protection of women, children, disabled persons, minorities, and the vulnerable; poverty; human dignity; classism; black identity; conflict, violence, peace, reconciliation, justice, and stability; religion and morality; imperialism; social and cultural values; discrimination; exploitation; and oppression. They have a new collection of  songs to produce in the studio: Uprooted People, War Crimes, Foreign Aggression, and Unite the Pearl.

For Godwin and Aloys, Uganda is a beautiful place by many standards but they feel that their country does not have a good government in place.   One can live freely as long as one does not offend the current regime or rebel against its conservative culture.

Today’s regime will track down, intimidate, and persecute those who do not abide by their rule of order.  And while they know many musicians who have been abused by the authorities, not one has left the country.  The results of the government’s intimidation tactics are self-censorship.  Artists do not want to attract the attention of the government so they focus on socio-economic issues, not civil-political themes that offend and threaten the survival of the government.

The issues not tolerated by the government relate to freedom of expression, freedom of assembly, freedom of association, the right to demonstrate peacefully, political participation, and freedom of sexual identity and preference.

The Anti-Homosexuality Act of 2012, which was overturned in June 2014 thanks in part for the efforts of Godwin, the program coordinator at the ASF (Avocats Sans Frontières), affected many who identified themselves within the LBGT community.  One well-known case was that of David Cecil, a theater producer and good friend of Godwin’s.  In September 2012, Cecil was charged by the Uganda Media Council and arrested for “disobeying of lawful orders”.  Cecil had organized in August the screening of the play, “The River and The Mountain” without authorization in at least two theatres in Kampala. The play, written by Beau Hopkins, is a story is about a businessman who comes out as a homosexual and is killed by his employees.  The authorities reviewed excerpts of the play before its launch in Kampala, then decided not to permit the play to show.  They deemed it threatening to the public’s interests for it "promoted deification of homosexuals and represented Uganda as a country inhabited by dangerous people". The court threw out the case against Cecil for lack of evidence. Godwin speaking on behalf of his friend when interviewed by the BBC after Cecil's release, said that Cecil and his lawyer were no longer speaking about the case for fear that attention would vilify Cecil in the press.  “Being a foreigner, the whole thing about homosexuality being seen as a foreign practice being pushed on Uganda, he may be looked as an agent of Western influence bringing homosexuality to Uganda.”  Godwin was right.  In February 2013, Cecil was re-arrested and deported him without notice for being an “undesirable person”, leaving behind his Ugandan girlfriend and two children.